With type 2 diabetes, elevated insulin resistance can be reduced, among other things through weight reduction and more exercise. About half of all newly diagnosed diabetics achieve normal fasting blood glucose with 10 kg of weight reduction. These insights suggest that overweight diabetics should make comprehensive lifestyle changes. However, this requires a high level of motivation and is difficult for many patients to achieve.

According to current studies, gently strenuous exercise is required at least three times a week for 30 minutes in order to prevent or have a lasting effect on metabolic disorders such as diabetes.

kybun helps you regain your joy of movement while losing excess pounds along the way, without spending any additional time. Standing comfortably on the kybun mat or walking in the soft, elastic kybun shoe allows you to exercise with less or even no pain, covering longer distances, and has numerous other positive effects on your body.
Among other things, it promotes circulation in the feet and improves sensitivity. 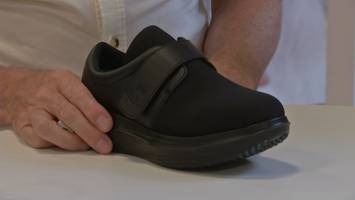 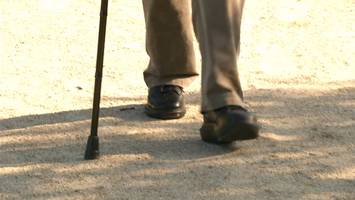 Roland Diewald has suffered from diabetes and circulatory disturbances for 40 years. As a result, his toes, forefoot and lower legs have had to be amputated, bit by bit.

Diabetes mellitus (‘honey sweet siphon’), in short: diabetes refers to a group of metabolic disorders. The word describes the main symptom, the excretion of sugar in urine. In ancient times the condition was diagnosed by tasting the urine.

Diabetes mellitus is a collective term for various metabolic disorders, with excessive blood sugar (hyperglycaemia) as the primary finding. Mechanisms leading to hyperglycaemia are mainly associated with insulin, the primary regulatory hormone for carbohydrate metabolism in the human body: an absolute shortage of insulin, a relative shortage of insulin due to reduced efficacy of the insulin (insulin resistance) or both together.

This type is an autoimmune disorder. The body’s immune system destroys the insulin-producing beta cells of the pancreas in the course of an inflammatory reaction called insulitis. This loss of beta cells leads to in increasing insulin shortage. Type 1 diabetes only manifests when about 80-90 per cent of the beta cells are destroyed. In the initial phase of the disease, there may still be minor residual insulin production – measurable through the c-peptide.

This is a disorder where insulin is present, but cannot work properly at its destination, the cell membrane (insulin resistance). In the first few years of the disease, the pancreas can compensate for this by producing ever larger volumes of insulin. But eventually the pancreas is no longer able to maintain this excessive insulin production. The volume of insulin produced is no longer sufficient to control the blood glucose level and type 2 diabetes mellitus develops. A type 2 diabetic produces far more insulin than a person with no metabolic disorder. But because of high insulin resistance, the level of circulating glucose rises anyway. In some cases, the relative deficiency leads to an absolute insulin deficiency later on.

Even in the 1990s, type 2 diabetes was trivialised in that it was called maturity-onset diabetes since it usually only occurred with advanced age. However, younger people are increasingly being diagnosed with type 2 diabetes as well. MODY (maturity-onset diabetes of the young) is diagnosed in children and young people with increasing frequency. The term ‘maturity onset diabetes’ is no longer appropriate because the disease develops at younger ages and there is a risk of developing massive damage to the health of affected individuals over the course of lifetime.

A distinction is made between diabetes mellitus that already existed before pregnancy and diabetes that is first diagnosed in the course of pregnancy (gestational diabetes).

Early diagnosis is important with gestational diabetes since excessive blood glucose levels can lead to serious disorders of the embryo or foetus.

Today, the development of type 1 diabetes mellitus is understood as a multifactorial process, involving both genetic and environmental factors.

An autoimmune reaction occurs when the immune system is exposed to a foreign antigen that is similar or identical to one of the body’s own surface proteins. The resulting immune response targets the foreign antigen as well as the body’s own proteins on the islet cells of the pancreas. It is also assumed that exposure to foreign antigens, especially in the first few months of life, has an immunomodulating effect that can increase the risk of developing type 1 diabetes (e.g. vitamin D deficiency: vitamin D supplements for infants not only prevent rickets but can also reduce their risk of developing diabetes later).

Other environmental factors being discussed are:

Type 2 diabetes is also a multifactorial disease, with excess weight as the leading cause. Its influence is altered by genes and other possible factors.

Excess weight is considered to be one of the main causes of this type of the disease. In addition to congenital insensitivity to insulin, being overweight results in additional insulin resistance of the body cells that depend on it. The exact mechanism of insulin resistance is still not fully understood.

One key factor is genetic predisposition and it appears likely that numerous genes are involved (polygenetic disease). It is likely that genetic differences are behind differences in the course of the disease.

An increase in the body’s own gluconeogenesis (sugar production) in the liver is another factor affecting the course of the illness.

High levels of vitamin D cut the risk of diabetes in half.
A lack of melatonin, which is mainly released at night, appears to increase the risk of type 2 diabetes.

Regarding the risk of developing type 2 diabetes, a cohort study showed that the risk of women dropped by about 15 per cent for each year of nursing. The protective effect lasts for a few years after weaning.

Diabetic coma is the most severe hyperglycaemic complication of diabetes, and is life threatening.

Possible accompanying and resulting disorders (after 11 or more years) in type 2 diabetics:

With type 1 diabetes, insulin, the lacking hormone, has to be provided artificially in the form of insulin supplements. The objective of this insulin therapy is not to heal type 1 diabetes but to replace the body’s own insulin, which is lacking. Treatment must, therefore, be continued until the end of life. No cure has been found yet.

Numerous risk factors and secondary disorders associated with diabetes can be positively influenced with kybun:

At first you may feel a bit unsteady on the soft, elastic kybun mat, or you may quickly encounter the limits of your fitness. You may feel your muscles getting sore or some kind of initial reaction somewhere on your body (e.g. ‘pinching’ or ‘pulling’) that you have never perceived before. If that is the case, please follow the tips under ‘Application tips’ and consult your local kybun dealer if you have further questions.

For information about the special kybun shoe exercises or the basic kybun mat exercises, please click here: kybun exercises The following adaptations to the standard implementation of interval walking are important in case of diabetic foot syndrome (DFS) :